I'm a science fiction and fantasy author, freelance editor and stay at home father of three. Check out this site for sample chapters of my fantasy novel Hunters, as well as writing tips, parenting adventures and occasional words of wisdom.

I have to stop opening myself up to Facebook debates with uninformed people who can’t spell.

The other day, a friend of mine reposted this link. 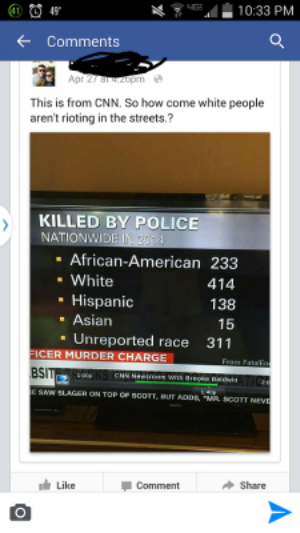 I thought the numbers here were at best pointless, and at worst deliberately misleading. There are over four times as many whites as blacks in the country. A much larger percentage of minorities are killed by police than whites, and that doesn’t even address that their deaths are in more deplorable circumstances.

Well, silly me, I made a comment to that effect. And, of course, got a response. 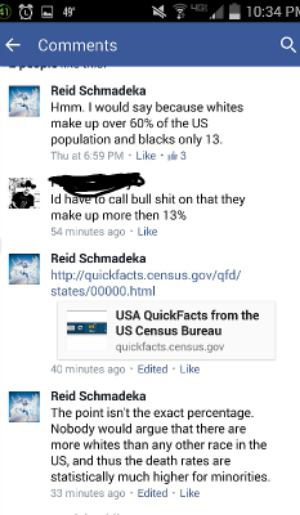 Fine, don’t believe the 13%. There’s census data to back it up. But the point is there are more whites than other minorities (hence why they’re minorities) so the numbers don’t tell the whole story.

Mr. Cowboy Hat had what I’m sure he considered a mike-drop response. 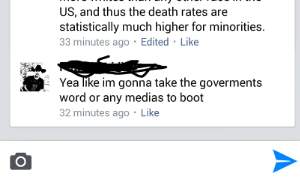 Hence the misspelled title of this blog. It’s not like he was commenting on statistics from the media in the first place. You can’t trust the government or the media, especially if what they say contradicts your own beliefs.

There were a bevy of responses I could have given:

I take it, then, that you agree with my second post, unless you think whites are a minority in the US?

I noticed you live in the Lewis-Clark Valley. I moved away twenty years ago. Is it still the utopia of diversity I remember?

So you don’t trust Fox News, Boehner or Dubya either? Good. That’s an excellent move.

Do you not take Merriam Webster‘s word, either? (I figured he wouldn’t get that.)

In the end, I didn’t respond. It wouldn’t come to anything, and many of my immediate reactions were attacks and not discussions. I’m not sure what point he wanted to make, or if he had one beyond arguing.

There is a partisan gulf in this country, and few people want to discuss what’s happening with an open mind. I have opinions as strong as the next person, and some are very hard to sway. But I like to think I would engage with an open and informed mind. Regrettably, too many people have no desire to discuss or compromise. And more than economics, racial tension or religion, that is the issue that most hurts our country.